Verve of the Earthless 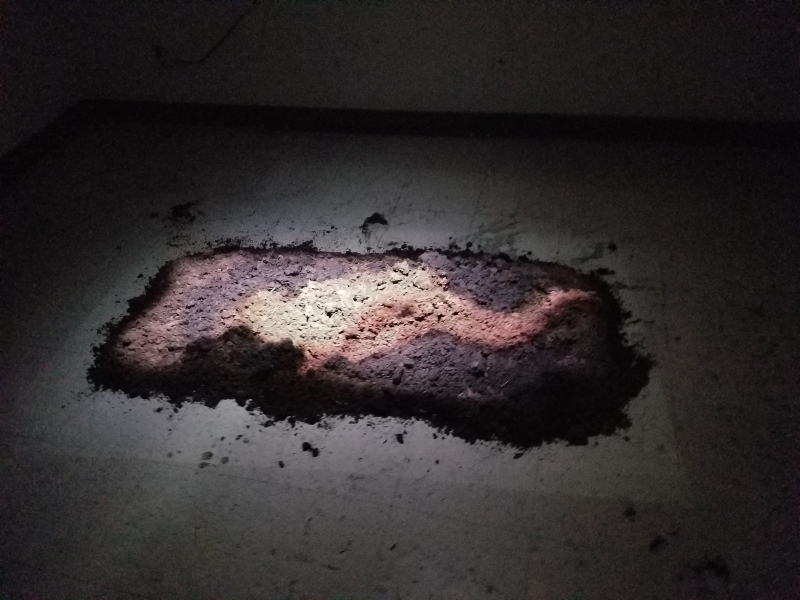 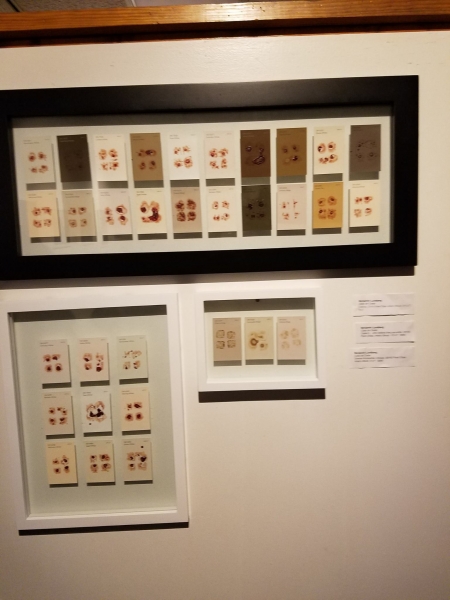 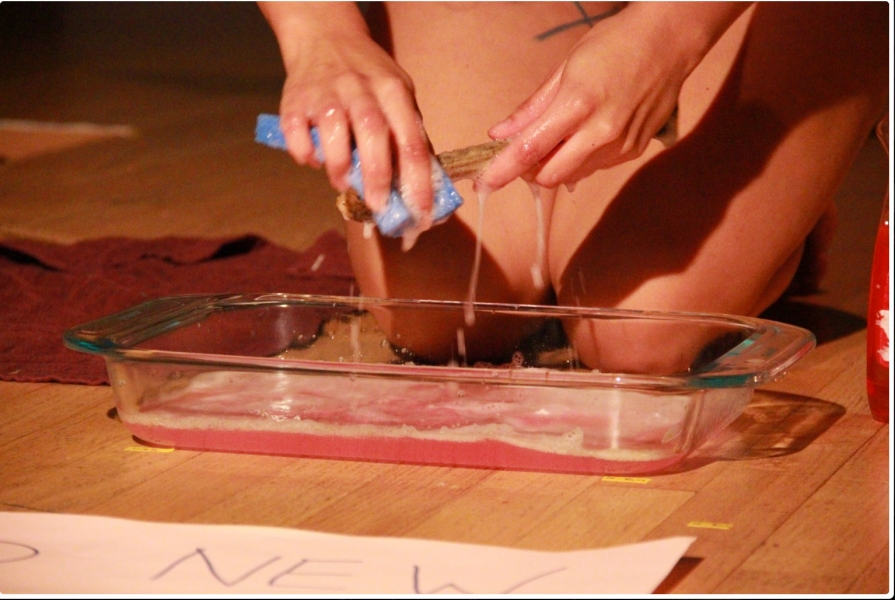 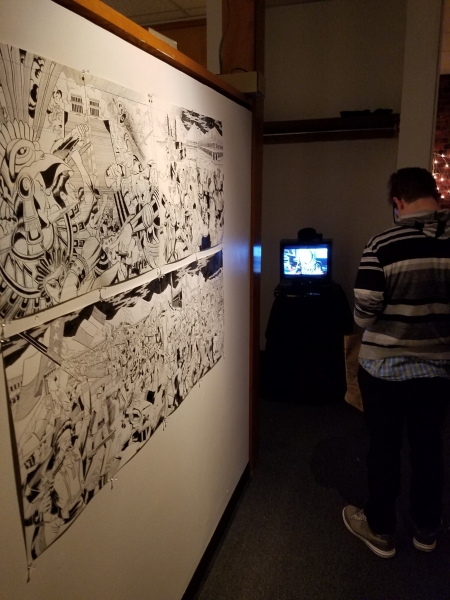 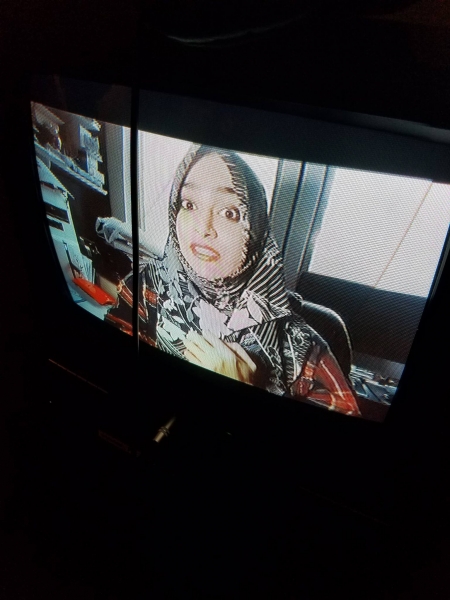 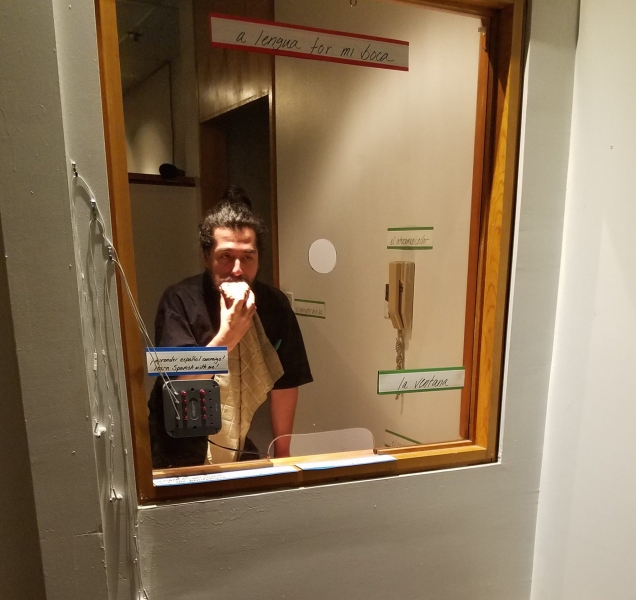 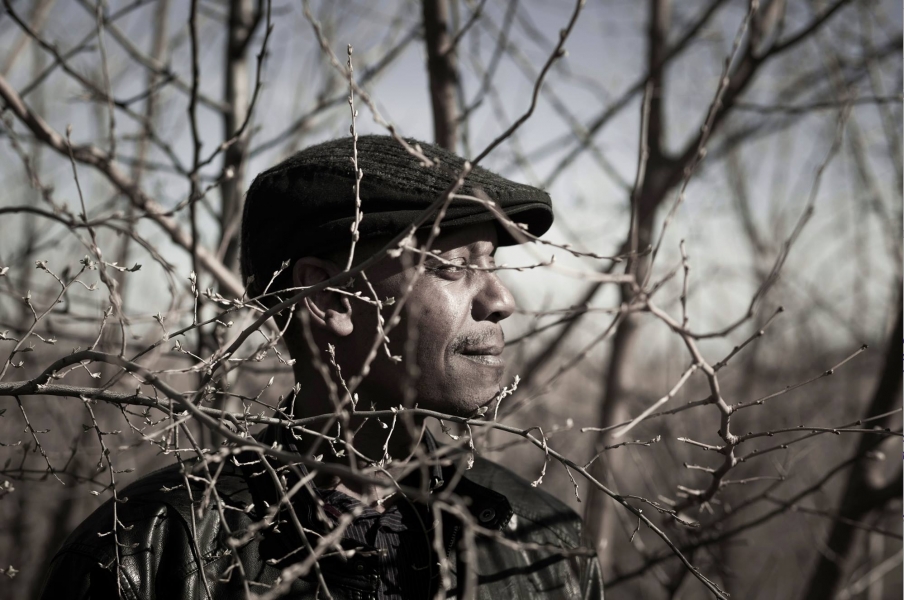 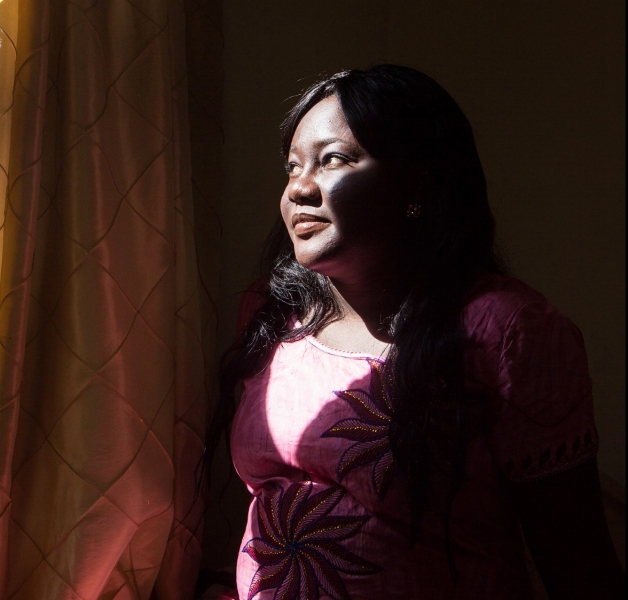 Curated by Jacqueline Arias, The Verve of the Earthless – Included artists using digital-based media including audio, video & photography to explore what it means to be isolated by society. Their work recodes, reinterprets and remixes their place on earth.

from the Casa de Casta series

In the 18th century, Casta paintings were produced in 16-panel collections to catalog and display Spanish classifications of racial mixture in Spanish-colonized lands – that is, various mixed-raced couplings within the Spanish-colonial social order – and codify this system of classifications into distinct categories (ex. mestizo, mulatto, cholo, etc.) that ultimately evidenced, legitimized, and upheld racial supremacy and dominance of “pure-blood” Spanish colonizers in the Américas.

Casta de Casa uses paint-chips: objects that contain both commercial and domestic resonances. When holding a paint chip, consumers enter an imaginative space, thinking about what is desirable for their home, and how color might transform the spaces that they live in day-to-day:

Can I live with this? Does this go in my home? Do I want to surround myself with this color?

To further allure the consumer, companies use naming (ex. “Nonchalant White,” “Well-Bred Brown”) and classification, or collections (ex. “Colonial Revival”), to brand their colors. These creative acts of naming and classing are created as a way to sell the consumer, not only a color, but also a story about how this shade will transform their domestic environment.

Casa de Casta assembles paint-chips – whose names echo deeply entrenched, racist ideas about color – to look at the politics of color and desirability within home aesthetics through a selection process guided by the question, what colors do we wish live with?

Action: Setting a table, Revealing and Displaying a beef tongue, Preparing to swallow, Swallowing the tongue.

A tape player recites a Spanish lesson throughout.

i1c2 presents a musical context whose identity is constantly deranged by permutation and asynchronous looping.

Captured beauty of the world we live in

Self-taught Manipulator of Light and Time

Will Work for Food

Inspired on a daily basis

Pen and Ink on Bristol Board

The narrative about Texas and it’s history has been mostly from a White American centric point of view. The romanticizing of the Wild West in popular culture has failed to acknowledge the existence of the Mexican and their many contributions to the United States. Movies and Comic books from as far back as the 1950’s did a poor job in depicting the accuracy of Texas diversity. Despite Texas and its Mexican population being annexed by the United States in 1845, rarely has a respectable portrayal been depicted in our media. Spanish is spoken in many Southern Texas cities because most people there are descendants of the original populations that were annexed.  As a cartoonist who has studied comic book history, I decided to explore these themes in my Six Flags over Laredo Quadriptych. I wanted to depict how the disputes over territories in what is now Texas came to affect the Mexican and native populations. Each spread depicts a different era. It starts with the Spanish meeting with the Aztecs and ends with the Mexican Revolution of 1910. Each spread contains a Flag or two that represents either a conquest, an invasion, a revolt, or a liberation. Which flag represents which is up to the viewer. The Spreads ended up being used for the first issue of my comic book Blazing Quantum, True Tales from La Frontera.

Each year more than 400,000 refugees and undocumented immigrants are put in immigrant detention centers across America. In Northern New Jersey alone there are five detention centers that, combined, hold over 2,000 people every day. Detention centers are “for profit” meaning that the two major private corporations, CCA and GEO group, have contracts with Immigration and Customs Enforcement (ICE) in which they have an established number of beds (currently 33,400 beds) that need to be filled each day at a cost of $166 per person, per day. They earn billions each year in taxpayer money; banks, corporations and educational institutions have stock invested (Bank of America, Wells Fargo, General Electric, Columbia University before “Columbia Prison Divest”), and consequently, they have major sway in political lobbying, pushing for legislation that will put more immigrants behind bars, thus increase their profits. The word “detention” is truly a euphemism for prison – the NJ facilities are either inside or adjacent to federal prisons, and the conditions and treatment can be worse than prison because “rehabilitation” programs are infrequent to non-existent (no academic, career or hobby classes offered), in certain facilities there is no real outdoor access, medical care is often neglected and ill-treatment of immigrant prisoners (like solitary confinement for prolonged periods) is easily overlooked.

The majority of people in detention are not criminals, though they are treated as such. Many refugees are picked up by ICE at the border crossing, or by customs at the airport at the moment they declare asylum. Undocumented immigrants residing in the United States, even for 20 or 30 years, with families and jobs, are apprehended after minor offenses, traffic accidents, and even more controversially, in ICE raids in their homes and schools. Minors are no exception to detention and are often put in adult facilities, and children are placed in “Family” detention centers. American bureaucracy is slow – court cases constantly get pushed back – there is a severe lack of pro bono lawyers, and most asylum seekers cannot afford the $7-10,000 cost of an immigration lawyer. As a result, many people rest in the detention system for a year or more, their only “out” is self-deportation. This system is created so that private companies make a huge profit, certain politicians gain influence with PAC donations and anti-immigration platforms, and immigrants are forced to choose self-deportation.

My name is Dana.

My birthday is January 7th.

My mother’s hometown is Haenam.

My father’s hometown is Virginia.

Language has the ability to unite and separate. In this video I am learning the Korean language and being penalized for imperfections. The action of pinning is a form of punishment and a marker of pain, guilt and the pressure to perform in a society that rejects me.

This work begins as a healing process, a transformative and embodied experience. The imagery projected onto the soil explores the notion of a conflicted and detached body, the body of an adoptee who is forced to constantly surpass the scope of her own detached and reattached history and reaffirm their body. The figure performs the act of authenticating the self. It mourns the loss of the imagined Latina self. The body and dirt are metaphors for transformation under conditions of immobility and deep disconnected heritage.

While exploring the transformative qualities found in soil; it’s intricate systems, working together, not easily identified by its parts, but known by its whole I began to see it for its transformative properties: as a caretaker of deep time; embodying death, birth and rebirth.

Am I pretty now?  – Jodie Lyn-Kee-Chow

I swam in a lake naked, feeling vulnerable like the nature, with the exception of my head, adorned with limbs of a tree. Wearing this elaborate headdress made of natural materials, wooden branches and flowers I swam slowly. The natural environment inspired me to decorate a simple yet elaborate crown for my solo performance. The woods and the lake gave me a very simple and primal approach to the work with thoughts of life and cycles. Our relationship to Mother Nature and the relationship to life and death was what persisted in my mind.

These elements, the large body of water and my brown body gave me the agency to be a native woman of the past, one not in need of covering up myself. The vast subliminal landscape and my body within that space intended to be a short narrative of survival. Here, I was from a foreign place washed ashore, easily camouflaged into this nature. I arrive by treading this body of water. The headdress, perhaps tribal in its own right may remind one of the headwear by Surma and Mursi tribes of East Africa’s Omo Valley, yet it’s reminiscent of a Victorian silhouette. I wear what may seem like a traditional accessory of my own tribe. I carried what was important. Was this my identity? Or have we created a rare form of hybrid beauty trying to fit in?

I swam from one end of the lake to the other in circles. The longer I swam the more tension was built up in the calm and quiet lakefront. At moments my body just floated pushing what looked like natural debris.

“Am I pretty now?” was created with the assistance of fashion designer, Jósa Goodlife at an artists’ residency titled “Essential Departures” at Rosekill Farm (near Kingston, NY). Artists responded to the site with consideration of the female body’s contextual relationship to nature as a point of departure. Artists were invited to participate with a performance work on this theme while using the opportunity to develop practices through intensive exchange and dialogue within a stunning natural environment.

Luncheon on the Lake  – Jodie Lyn-Kee-Chow

A grand adventure takes place on a lake where the artist performs as a native ‘Arawak’ queen with her king and serves a special exotic dish she cooked called ‘Ackee & Saltfish’ brought to Kingston , NY  from Kingston, Jamaica. Guests were invited to taste the dish upon arrival by rowboats to the middle of the dock on the lake. Multiple performers were included and played the roles of colonizers and native tribe people who wore costumes the artist created out of low cost tablecloth vinyl and collaged paper masks.

The body as national body, whether conspicuous or discreet, repeatedly manifests through postcolonial Arabic literature as reflections of and in response to the multifarious manifestations of occupation and subsequent violence of emergent nationhood. An exploration of the relationship between bodily trauma, postcolonial nationhood, and the body as metaphor in Arab novels, Figure of Nation, (as part of the series Notes on the Failures of Motherland) uses entirely archival and historical footage to reconfigure a narrative of this trauma. Drawing from footage from “The Middle East” during late colonization, anti-colonial resistance, and postcolonial nationhood, woven between soundbites of readings from a selection of Arabic novels, Figure of Nation is an attempt to identify the contradictions, fissures, and discontents inherent to the dilemma of postcolonial nationhood.

Sumak Kawsay(Kichwa language Beautiful Life) a journey away from the monotonous consuming city life.Sarayaku is located in the Amazonic region of Ecuador with a population of 1000and 2000 kichwa speaking people. In this astonishing voyage countless natural gifts adorned this small indigenous village . The people of Sarayaku are humble, genuine and full of ancestral wisdom. One of the many elements of beauty is the art of Wituk painting. Wituk is an Amazonian fruit that is roasted so that the ink inside can be used for decoration . The markings represent animal power . The designs on men’s faces are thicker for example jaguar style . These paintings are done before hunting or important town meetings . The people of Sarayaku make their own pottery with many different clays and use natural human hair as brushes .

“Pink Ribbon” is a direct confrontation of misogyny, the replication of patriarchy in queer relationships, and the ways in which the racialized feminine body is devalued and targeted. It connects personal experiences with gender-based violence and that of other cis/trans women in recent news, to societal and mainstream norms that are commonly overlooked. In this piece, prose, ritual, and song work together to honor the memories that our bodies can never forget.