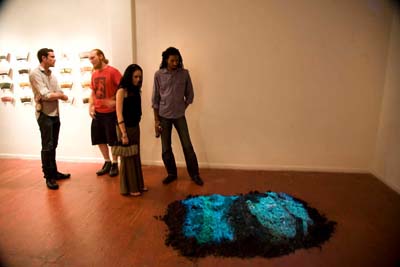 I was honored to be a part of a show at Index Art Center curated by Jeanne Brasile.  A collection of work, “inspired by earthen forms” and earth art, “a movement dating to the late 1960’s that was established by acclaimed artists such as Robert Smithson, Walter De Maria and James Turrell, among others.” Artists for this exhibition included: Andrew Baron, Kathy Goodell, Marc Leone, Greg Leshè, Ruby Meritt, Mimi Weinberg and Sook Yoo.

Terra Forms re-considers this pivotal art movement with artwork literally fashioned from earthen materials such as dirt, clay and sand, as well as traditional media including oil paint, pigment and photography that reference or depict terrestrial forms. Brasile notes that she was inspired by the writings of artist Robert Smithson as well as her love of the outdoors. She is an avid hiker and notes, “This exhibition is unusual in that it is a hybrid of my curatorial and personal interests. I don’t often get to mix those two worlds.”